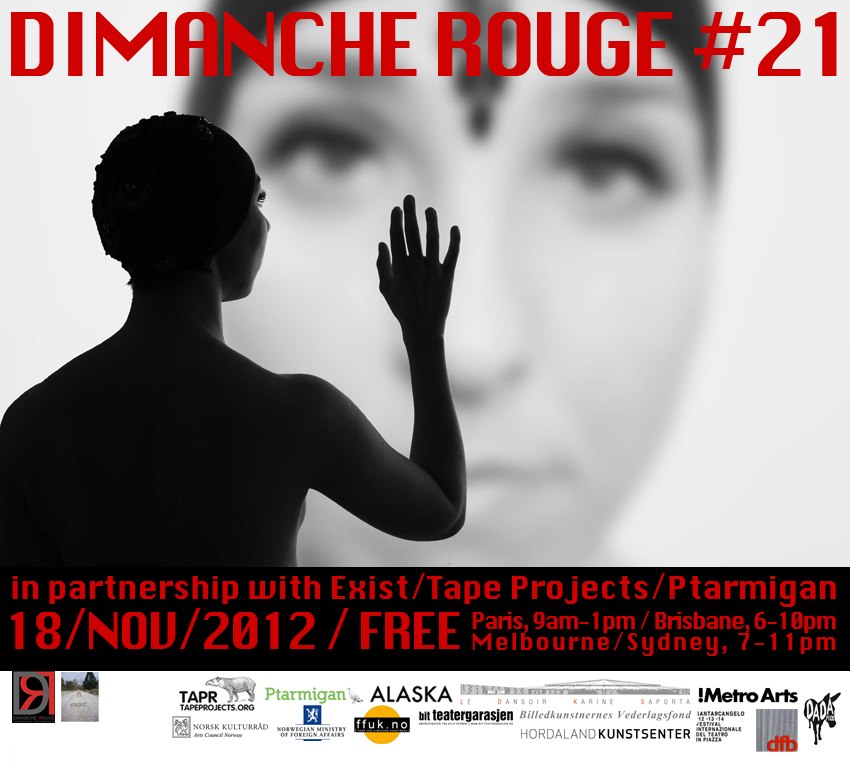 Ptarmigan is having its first international venture outside of Europe in collaboration with the Paris based Dimanche Rouge team, Exist from Brisbane, and Tape Projects in Melbourne.

For its 21st edition, Dimanche Rouge partners with three Australian cities, Brisbane, Melbourne and Sydney to produce a cross streamed festival on Sunday, November 18th 2012. Each city will present a one-hour program to be live streamed to the other cities. The edition will begin with the Melbourne program from 7-8pm (Melbourne time), followed by Sydney 8-9pm (Sydney time), and 8-9pm (Brisbane time) ending with Paris (noon-1pm Paris time). For the Paris edition we would like the public to join us for a complimentary breakfast at 9am and Norwegian brunch at noon.

Dimanche Rouge has become one of the largest monthly experimental performance festivals in the world with almost 600 artists from 61 different countries featured since its inception in February 2011.

Dimanche Rouge is currently developing projects abroad intended to create sustainable cultural and artistic exchanges. In 2012, in addition to the Parisian monthly events, Dimanche Rouge has also organized events at the Visual Brasil Festival in Barcelona, Spain, and in Toulouse, France. Dimanche Rouge # 20, held in conjunction with the Mairie 19eme and Kumu Art Museum, saw over 100 artists performing in Paris and Tallinn over three days.

Experimental performing arts are becoming an integral component of contemporary culture. We hope you will join us in exploring this vibrant art scene.

SYDNEY ARTISTS
Schappylle Scragg is the hostest with the mostest. Last seen sunning herself in all her bling glory on the hottest Gold Coast beaches, Schappylle has returned to Sydney for a blast with her wild past. She will also host the Sydney component of Dimanche Rouge #21 where France meets Australia meets Schappylle.

Liam Benson presents the performance ‘In his own words’ which is a performance responding to site of Alaska projects. Using the acoustics of the car park Benson will explore his vocal range by reciting and sounding out words, sentences and songs associated with Australian masculinity.

Janet Meaney’s performance  ‘Journeying’ alludes to the ephemerality of our naming and mark making as we journey through the cycle of life. “I will step barefooted into a puddle of white kaolin clay. Carrying a sack, I will scatter Tumerict from it onto the ground in front of me. Then, walking forward I will leave white imprints in the Tumeric  until they become faint.  Walking back I will again step into the puddle and repeat the action alongside the previous foot prints. This action will be repeated until the lines of prints form a circle emanating from the centre. The kaolin defines me as caucasian, the tumeric signifies the Indian tradition of purifying and beautifying the body and the action is performed on sacred aboriginal land ‘Yarrandabby” Elizabeth Bay.

Naomi Oliver presents a performance titled ‘Yes / No’ which looks at identifying and overcoming self-defeating behaviours (in this case, passivity), exploring the space between personal resolve and  actual outcome: I want this, but keeping doing this instead. “Though I can feel the undertow/ I never make a complaint/ Till it's too late for restraint/ Then when I want to I can't/ I can't sayyyyyy Oh no”. (Rodgers And Hammerstein 'I Cain't Say No!’)

Rhys Turner & co present Squiggle 2.5. Squiggle is an ambient multiuser video sculpture with live performance. Using a touch device (iPad, iPodTouch, iPhone, TouchPC etc...) visitors help create an interactive video, performance and sound sculpture with game-like interaction like that of a VJ. The project explores the potential connectivity and virtual baggage we carry around daily with so-called ‘smart’ technology and ties it into spoken word, writing and poetry. Squiggle 2.5 is in made collaboration with graphics by DAVROS (AUS), sound by VLADISLAV DELAY (FIN), and POINT THE BONE (AUS).

- November 18th - across many timezones-