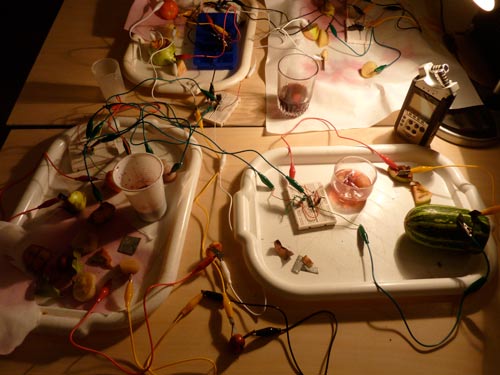 'A louder performance would be better' workshop
workshop : sound : electronics

'A louder performance would be better' is a two-day low power sound workshop, led by Natalia Borissova (Moscow/Munich).

About
During 2-days of hands-on and performance-oriented sessions, we will experimenting with-electro(al)chemistry of the natural electrolytic environments, constructing an instrument for sonification of the natural logarithms.

Day one (6 October from 16:00): Building organic batteries (involving various kind of food and drinks), determining current and voltage, wiring cells in series, parallel and mixed.Temporal construction of the simple sound-module based on Hex Inverter IC. Powering and playing with electro chemistry of the cells, involving rooms' walls, floor and any conductive objects and people in the room.

Participants will exhibit/perform their creations to the public in a free concert on 7 October (more details to come soon).

Participation is limited to a maximum of ten (10) people and a materials/teaching fee of 15€ is required.

Natalia Borissova is Munich-based Russian (Moscow) media artist/organizer. Since 1995 she has been experimentally working with visual media while living in Moscow, Berlin, Stuttgart, Buffalo and Munich.  Gradually her main artistic focus has shifted from visual- to sound and DIY. Since 2006 she is running aa-vv.org - migrating lab for everyone who has a joy of working with technology in diy, experimental, critical and unconventional way. She is trying to keep both change and continuity in setting up hands-on creative workshops, as well as instigating those self-(de)constructivist, experiment-based, temporal norms-forms abandoning situations. Borissova was a visiting lecturer at State University Buffalo NY (SUNY), had a scholarship in Munich as well as a residency at Akademie Schloss Solitude (Stuttgart) and Poellau (Austria).