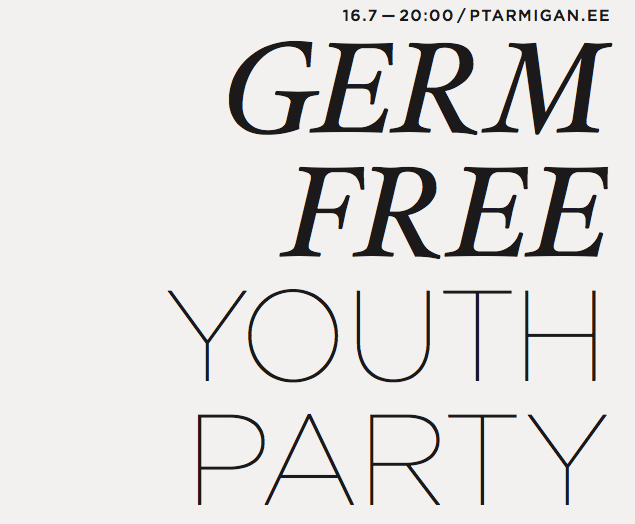 Ptarmigan's first Germ Free Youth Party is Saturday 16 July.  It's a variety night of strange performances, sounds, and other intrusions.

David Rothenberg is a composer and jazz clarinetist who has written and performed on the relationship between humanity and nature for many years.  He is the author of several books and  has released recordings on ECM records.  Tonight at Germ Free Youth Party pairs him with his son, aka UmruX5, exploring the basic question at the core of all musical exploration: can parents and teenagers coexist?

Paris and Tacky Motel, are a performance duo that parody popular culture, suburbia and contemporary art. The characters are loosely based on over-media-saturated socialites such as Paris Hilton. Mixed with this pink-clad celebrity stereotype are the qualities of the aspiring suburban teen, including the influence of consumer fashion trends, identity angst and the superficial unrequited desire to be famous. The Motel Sisters have undertaken guerilla television appearances on Australian daytime tv shows, and also utilise aspects of interactive websites in their art-making. For instance, they present video art online on YouTube and cheekily experiment with Chatroulette. The Sisters endlessly self-promote using the ultimate self-promotion tool, the internet - in order to push the boundaries of performance art in a digital age. In July 2011 The Motel Sisters will be in Estonia presenting their 'European and Australian Contemporary Art and Performance’ presentation. http://www.motelsisters.com/s

Carlo Cubero will be speaking or performing or doing something.


Steve Vanoni is an artist from California whose work extends across a mega range of arenas. His performances often involve collaboration, even the focus of his solo performance work is (in his words) "to involve the audience in the performance.... The audience members can be living contributors in performance works, can move and share their thoughts and feelings… if the performer is interested in opening the door to them…. For me an audience that is sitting still, quiet and static might as well be dead bags of flesh non-actively stuck to a spot…. That perhaps is an extreme viewpoint, but I like to remind them that we are alive!!!!! We are able to move and think and create something living together given the opportunity." For more info check out: www.artslant.com/global/artists/show/46697-steve-vanoni & http://www.horsecow.com/